So you have read about how flat sizes have shrunk… or not, depending on who is talking but I think a picture tells a thousand words. In this case, thought I’ll dig up HDB floor plans from the respective periods that fit the representative sizes provided in this article. If you’ll prefer not to read my thoughts, figured that the floor plans are fairly explanatory by themselves. 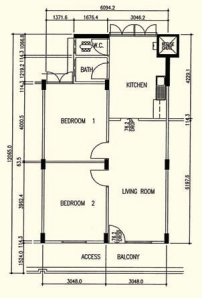 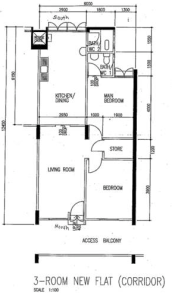 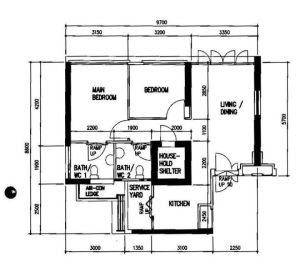 Size-wise, the 3 room flat doesn’t seem to have shrunk as dramatically as the bigger HDB units, but why is the latest incarnation of the 3 room flat smaller than ever?  Based on the floor plans:

So the bedrooms (especially the 2nd bedroom) tinier than ever, and the massive kitchen that can be used as the dining area (as I remember from my childhood) has also shrunk dramatically.  I won’t comment on the service yard cos I think it’s a good thing. Too many people have died hanging clothes. 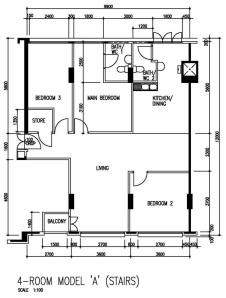 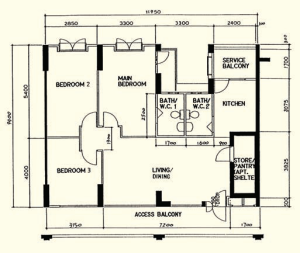 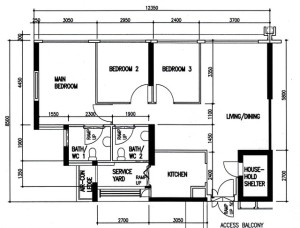 Obviously, since the 4 room flat is down a good 10% in size from it’s earlier versions, the space will get crunched.  But why else is the latest incarnation of the 4 room flat smaller than ever?  Based on the floor plans:

So the bedrooms have now shrunk so much, I wonder how the government/HDB designers expect people to fit proper sized wardrobes AND beds into the space provided? Little wonder walk-in-wardrobes (WIW) have become so popular… 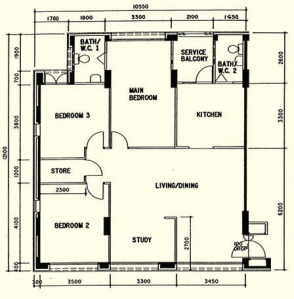 Again, the loss of more than 10 sqm makes a diff, but why else does the latest incarnation of the 5 room flat feel smaller?  Based on the floor plans:

The older HDB flats do feel a whole lot more spacious… I can’t be sure from the plan (113 sqm), but I think bay windows makes the flats/rooms feel smaller too.

To be balanced about it, HDB no longer builds corridor units, which I think is a good thing (major improvement!). Lifts now go to every floor (unlike in the past when it’s every 4-5 floors), landscaping looks better, pipes and wires are hidden, etc. So there are improvements. But the living space is really really important to me (obviously, since I chose to buy an old executive flat), and I think to many Singaporeans as well.  Even if the space will not shrink further, I do hope that the HDB designers think about minimizing ‘space wastage’ such as corridors and oddly shaped rooms. Ditto the excessive use of bay windows (bay windows have appeared in some HDB shower areas, how STUPID is the design for that?).

I must also point out that HDB/Khaw didn’t mention that executive flats are no longer available.  The executive range of flats included the executive apartments (EAs), executive maisonettes (EMs), multi-generational (MG), and jumbo apartments that are considerably larger – at minimum 140 sqm, going up to a massive 190 sqm for the aptly named jumbo flats. They also did not mention that flat sizes varied widely – HDB has been confusing us for years with terminology such as standard, improved, “A”, etc.  E.g. An old 3A HDB 3 room flat is a spacious 90 sqm and is as big as the modern 4 room HDB.

UPDATE: Interested to know who were the men/women behind HDB and public housing development? Have  a look at this post: National Development Ministers, Perm Secs and HDB CEOs

Some background on what triggered the debate, and interest on shrinking HDB sizes.

The online National Library Infopedia is a good source of info about Singapore.  One interesting piece of information I read from Infopedia about Public housing in Singapore:

“The standard design plans for new flats have been updated over the years to cater to the changing expectations and preferences of buyers. For example, three-room flats did not have a bathroom attached to the master bedroom until the 1970s, and executive flats were launched in the 1980s in response to the desire for bigger flats while the elderly-friendly studio apartments were introduced only in 1997. These changes reflect the broader shift in the focus of public housing programmes from quantity to quality.”

If that is the case, why is Mr Khaw not providing us with bigger flats now that it’s clear that Singaporeans are very attached to their living space? As I’d mention in my other post: National Development Ministers, Perm Secs and HDB CEOs, to be fair Mr Khaw needs some time to fix the problems created by his predecessors. But  I hope he is thinking about how to fix the root cause of the unhappiness and not just churning out more of the same horrible layouts used these past few years. 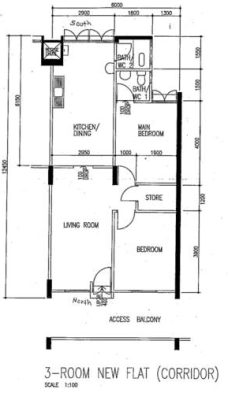 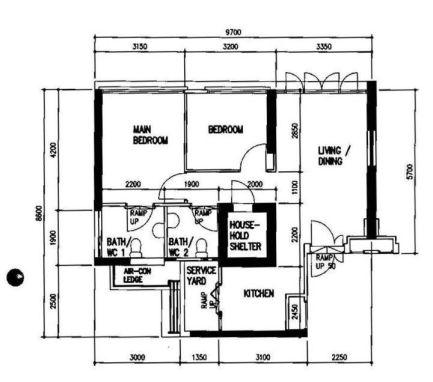 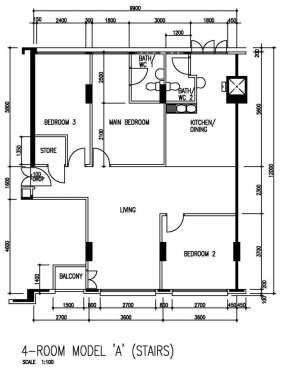 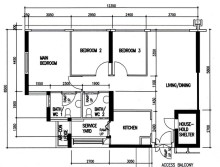 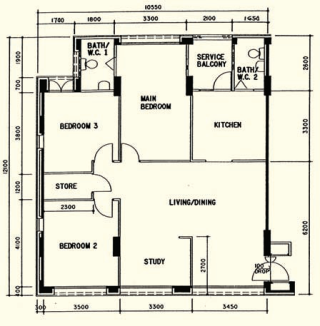 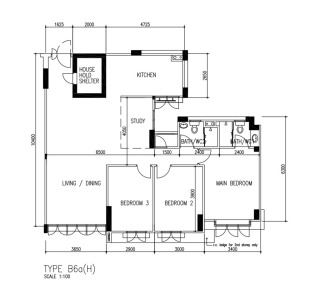 Latest posts from my baby blog

Don’t ask me about my reno or items cost…

I will not entertain any questions on renovation cost/quotation or furnishing cost. I honestly don't remember the details of pricing for the stuff I got and it's outdated anyway. Do a search and if I've mentioned where I got the item from, please call the store to check the latest pricing.

This site is featured on NewsLoop For iPad and iPhone readers. Click on the pic to download from the app store!

emrenoblog by amodularlife is licensed under a Creative Commons Attribution-NonCommercial-ShareAlike 3.0 Unported License.
Based on a work at emrenoblog.wordpress.com. 2011

How We Came To Be
Dreams of Jianghu

&. About me, my baby, and random musings

The latest news on WordPress.com and the WordPress community.